All questions regarding the dumping of media go here.
Post Reply
10 posts • Page 1 of 1

As Teac 5.25" drives seem to have a bad reputation regarding flippydump usage I decided to give my drive a go.

After grinding few bits of metal, cutting some plastic and disregarding any alignment the drive had, I now have a drive that happily reads C64 disks, and without added track 0 bypass by using just -a+8 instead of -b-8 switch.

Some disks show minor alignment issues still but so far so good.

Will add some pictures later.
Top

Before you even think about trying it: DON'T DO IT!
If you cut away your feet, your hair, your floppies or something else just as important: You have been warned!


Start from the botton side by pulling out the end locking tabs on the connectors to release the cables, then pull out the two stiff cables going to the spindle driver board and to the steppermotor. Then unscrew the two screws holding the mainboard in place (THIS WILL MISALIGN THE TRACK 0 SENSOR!), but don't take the board out yet. 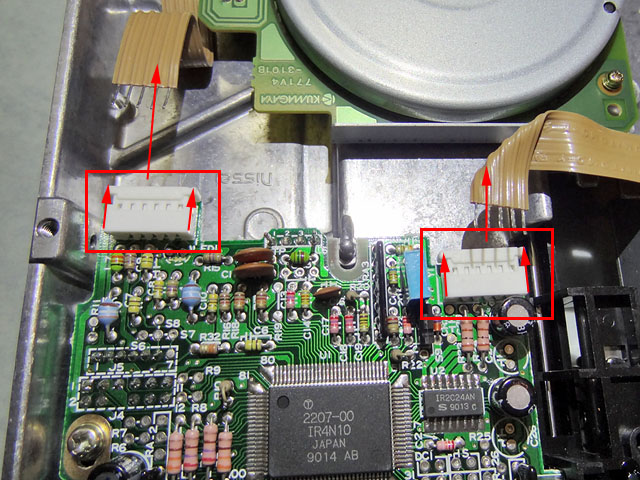 
Now turn the drive over pull out the read/write head cable. After that you can pull out the mainboard from the other side. The third stiff cable going to the write protect and index sensor board will remain soldered on the sensor board (note that this cable might be a bit tricky to get back into the connector when re-assembling the drive). Then unscrew the two screws holding the spindle latch frame in place. 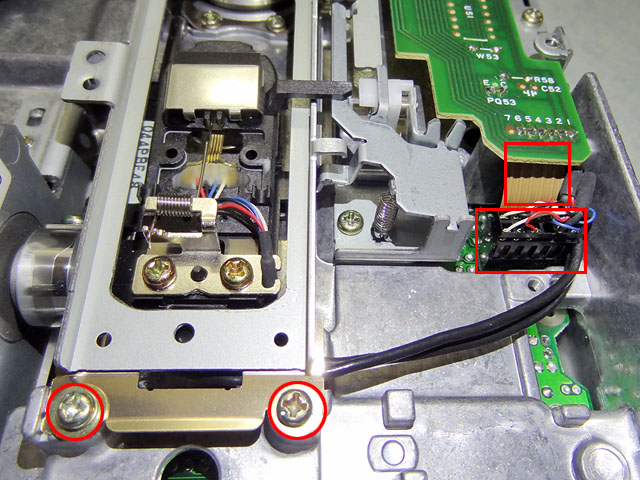 
Following the six pictures you should be able to see how to CAREFULLY take out the spindle latch frame. First push the read/write head towards the spindle, then lift and rotate the frame so you get the little metal tab from under the mechanism keeping the head from being lowered if there no disk in the drive. After you get the little tab on top of the mechanism, pull the head back to the outer edge and then tilt and rotate the frame to get out while carefully lifting the upper head, but DON'T FORCE IT. 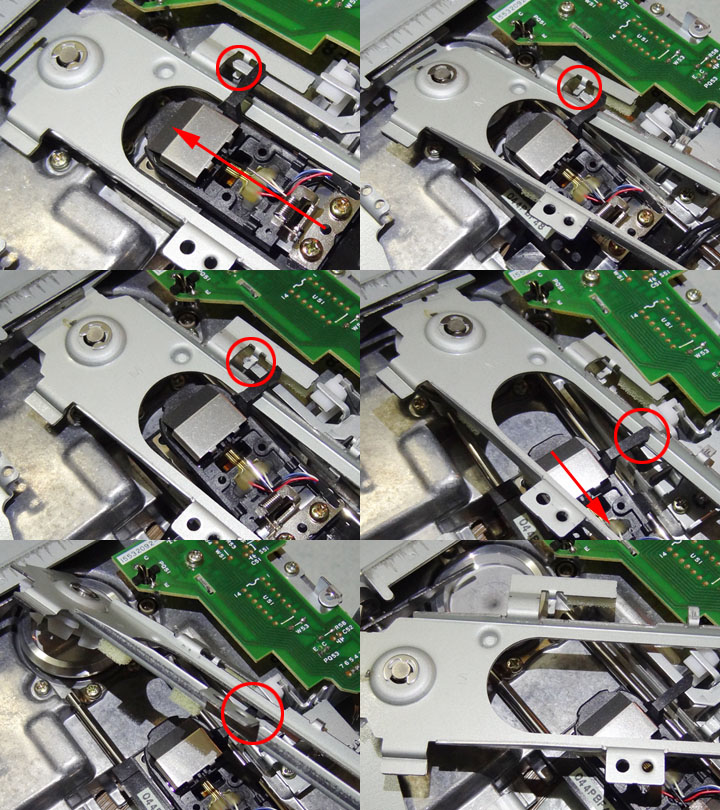 Next cut away one of the tabs that is in 90 degree angle (already cut in this picture) from the frame and a bit of the rest of the frame aswell so the read/write head can move further outside afterwards. 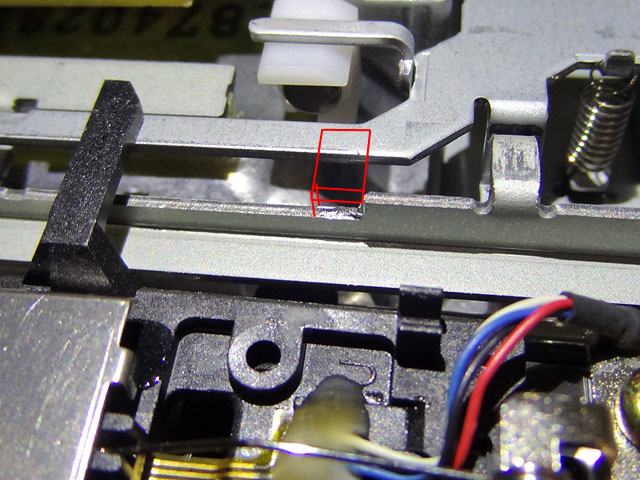 
Then lift the two read/write head cables from the plastic slots holding them in place, and cut away the marked part of the plastic (already cut here). Then push the cables back into the slots. 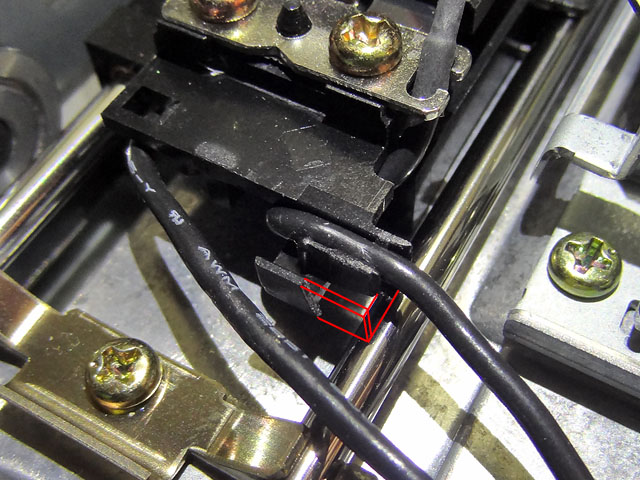 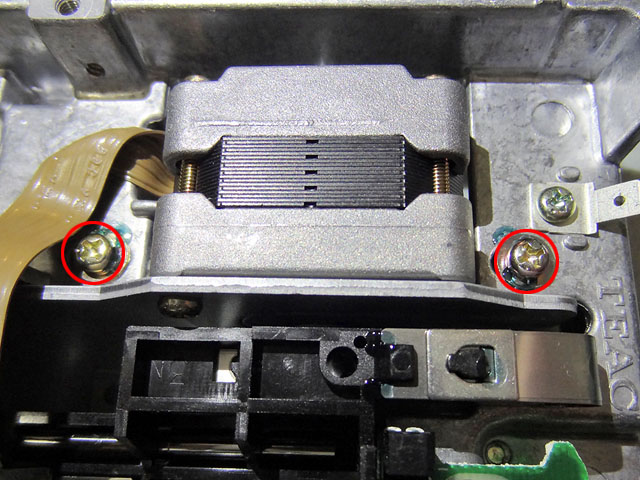 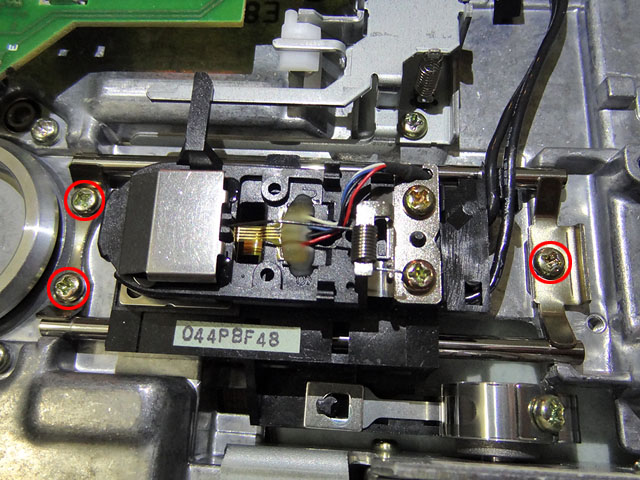 
Then CAREFULLY lift the sled and steppermotor out of the frame. AVOID BENDING THE METAL STRIPS CONNECTING THE SLED TO THE STEPPER! 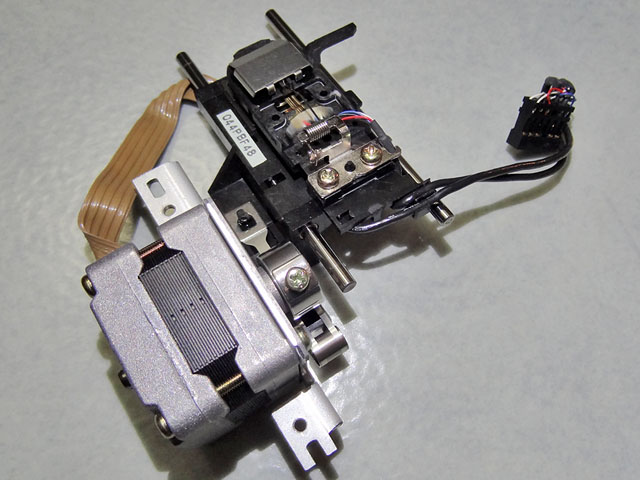 
Notice, this is possibly an optional step as I'm not 100% sure if this is actually needed: Turn over the sled/stepper and cut away the marked piece of plastic from the underside of the sled to prevent it from touching the screw at the outer end of the rails. 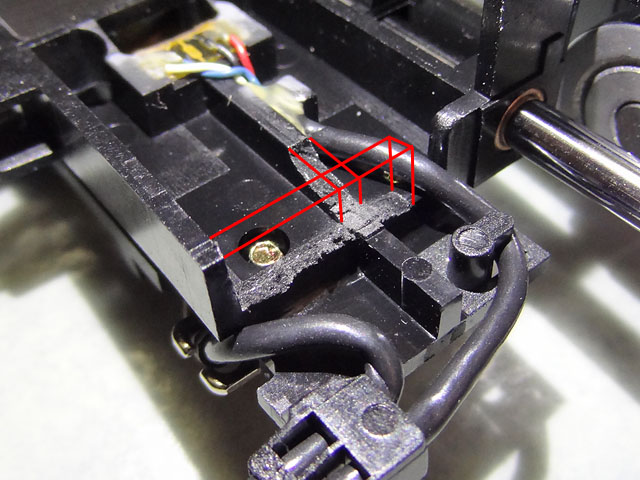 Now we get back to the main drive frame and we have to grind/cut away the track 0 stop from the frame with a file, Dremel, etc, and a little bit more just to be safe. 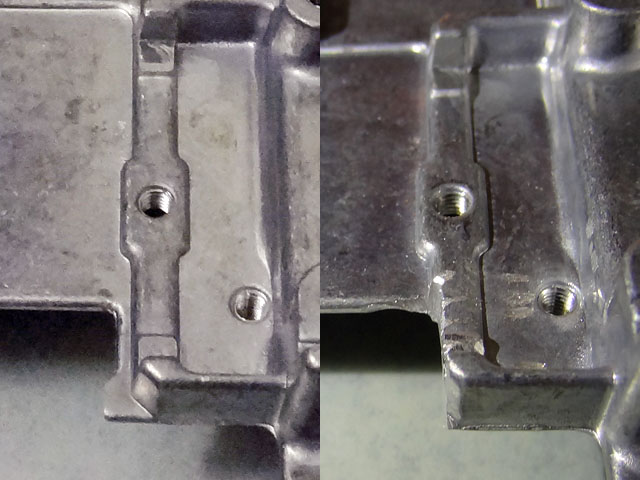 
After the drive frame itself we have to grind/cut away also some of the spindle latch frame aswell to make room for the read/write sled to move further. 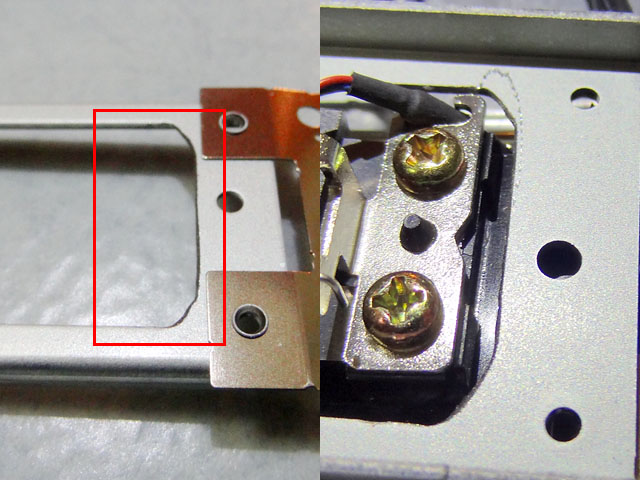 
Now re-assemble the drive in reverse order, AGAIN BEING CAREFUL NOT TO DAMAGE THE SLED/STEPPER COMBINATION, remembering to turn around the metal piece held by single screw at the end of the sled rails. Make sure that the metal piece doesn't rotate when you tighten the screw.


When screwing back the steppermotor, push it almost to the outer edge of the frame. 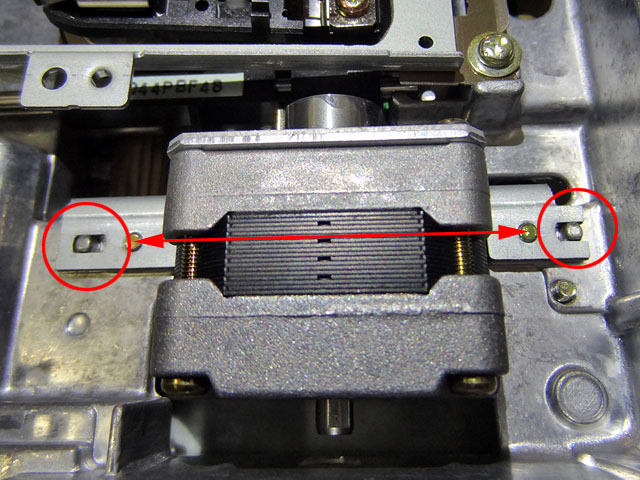 Then insert back the main circuitboard, moving it also almost to the outer edge of the frame, and reconnect all the cables. No more than 1 mm has to be cut from the end of the plastic piece moving between the track 0 sensor. Without cutting the tab shorter, the drive will only move to track 2 on the upperside of a C64 disk. 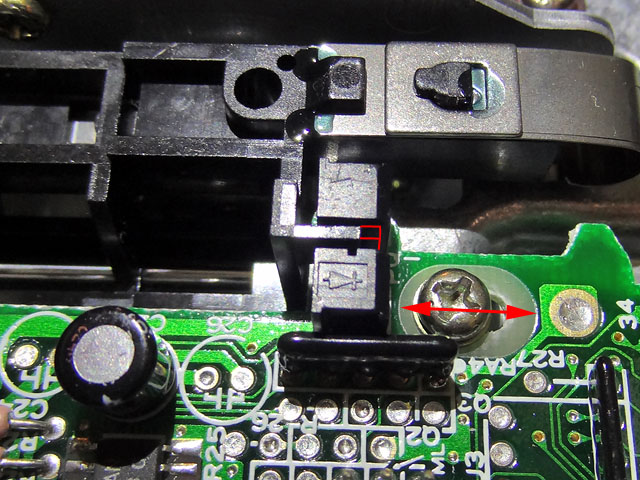 
Finally careful finetuning has to be done with the steppermotor to get the read/write head aligned into the middle of a track and the mainboard to get the track 0 sensor into a correct position. Proper alignment disk is needed to get the alignment perfect, but a good disk (original preferred) should help getting an ok'ish alignment with trial and error. These two points have the required differential amplifier signals that can be probed with an oscilloscope when checking out the alignment. 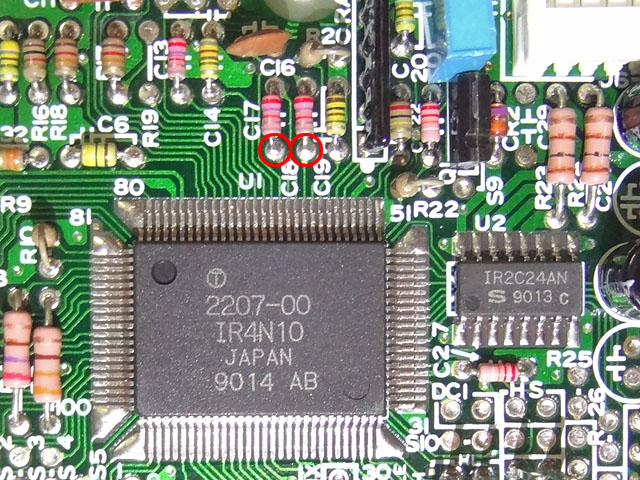 Excellent work ZRX! The modification is just a little bit different for the 7193 and 7149 models but it works just as you describe here.

Note to anyone trying this mod - when you are done and go to align the heads - add 8 to the track you would normally use on your alignment disk for side 0. As mine uses track 32, I had to step to track 40 to find the catseye.
Top
Post Reply
10 posts • Page 1 of 1