There has been various changes to the user interface over the last few weeks. We've not really gone into very much detail about this, so I thought I explain some of the recent enhancements in the already public version, and also some in the version to be released soon:

You can now adjust the RPM at which a track is interpreted on the charts using 'r' and 'shift-r'. This works on both the embedded display as well as the separate window, and on the histogram and scatter plot. 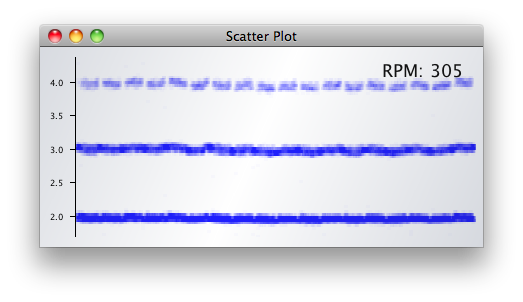 You can now dump flippy disks using the user interface. This allows adjusting the track zero position of each of your drives from the UI (useful if you have both a 3.5 and 5.25 drive connected): 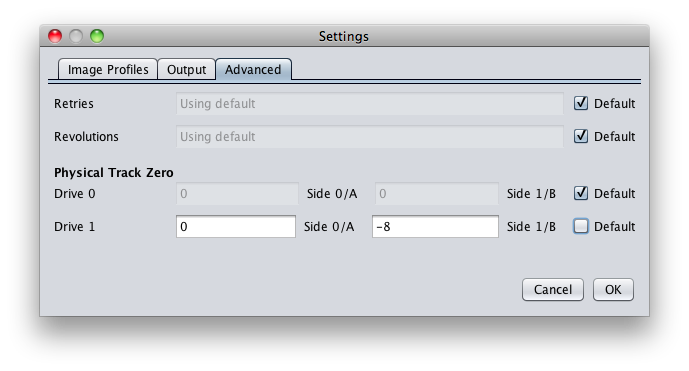 (You can see you can select the retry count and number of revolutions in that configuration screen now, which is also new) 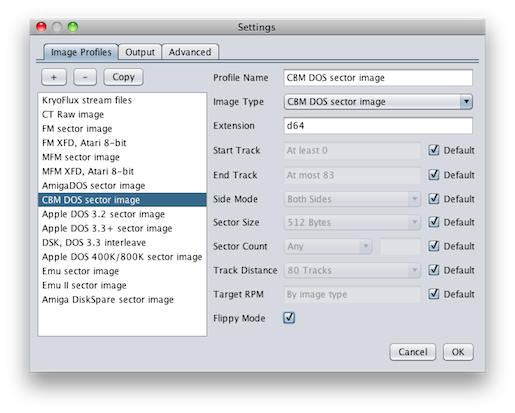 Another feature recently added in the UI is the ability to dump only a subset of tracks by simply selecting the range in the track view. This maybe more useful for us than to you, but I might as well mention it: 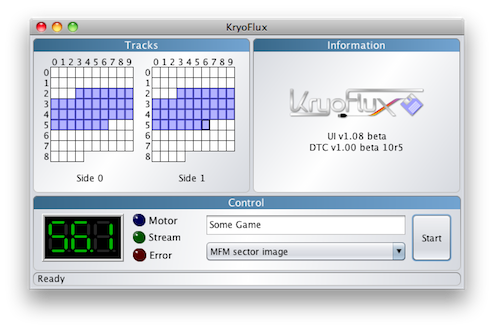 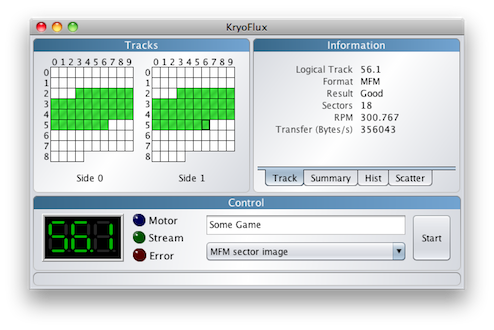 By the way, if you had not already noticed you can lock onto a track by clicking the left mouse button (useful for then navigating the scatter chart). Click it again to unlock it. You can now also move the track "in focus" using the arrow keys, locked or not.

The DTC command line application indicates a number of flags if there were problems decoding a track for a selected image type. The UI, while being able to read them, did not actually visualise them until now. 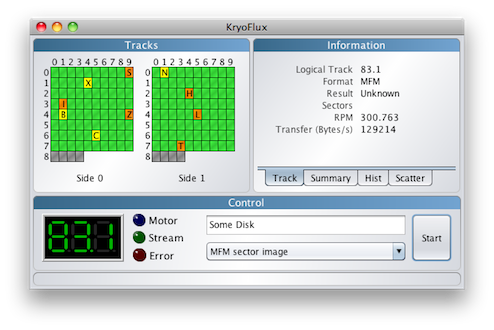 (Such and interesting display is obviously produced by test data.

The the yellow coloured flags are warnings, and the orange colour is more serious problems, usually meaning that the sector image you selected cannot represent the disk data.

If you want to know what each flag actually means, simply hover over it in the track display and it will show in the status bar. 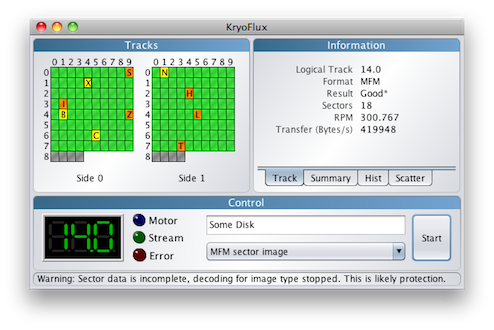 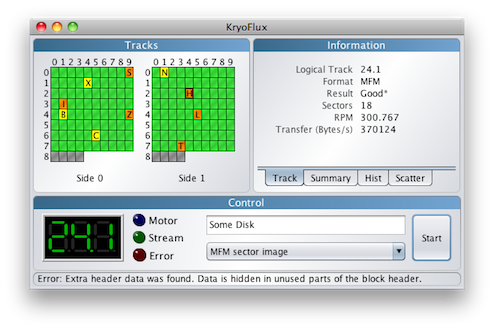 If you have suggestions on the user interface, we are always welcome to hear them.
Top

The current public version of the GUI has a small change, which I will document here for completeness.

Basically, although we already had the ability to select between available revolutions with the F-keys, it wasn't that useful for partially formatted tracks, because the zoom level reset every time you changed the revolution, but now, the zoom level is preserved.

Here is a track with flakey bit protection using an unformatted section: 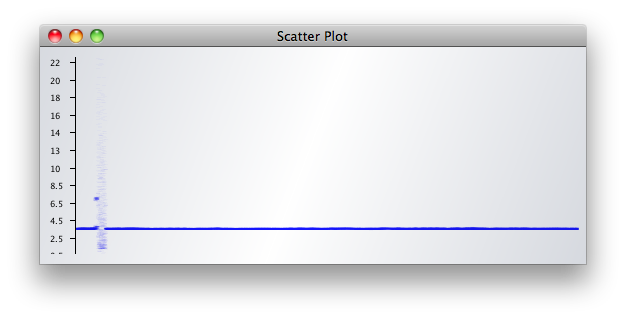 Zooming in, in the normal way give you the following, which does indeed look unformatted: 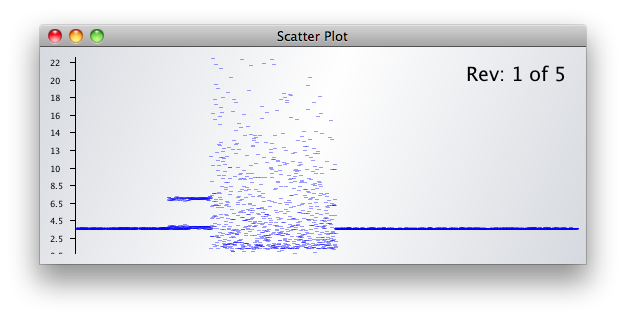 Now that the zoom level sticks, you can select different revolutions to confirm it is indeed an unformatted section:

Again, this is in the current version. There are new features coming in the next version, and we will document those here very soon.
Top

Oops. Yes, your absolutely right. Dungeon Master is my usual example of a funky protection, and I'm obviously in a habit there. I've changed the post.
Top

The next version of the GUI (1.6) has the following features...

Changes to the scatter chart: 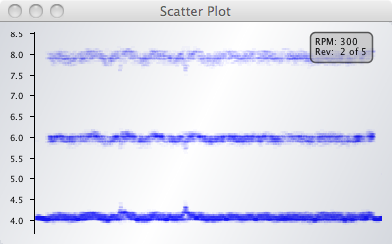 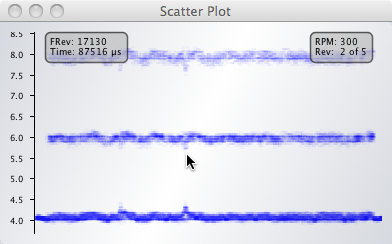 4) Show flux reversals and time within the area selected by the mouse, and the total reversals & time 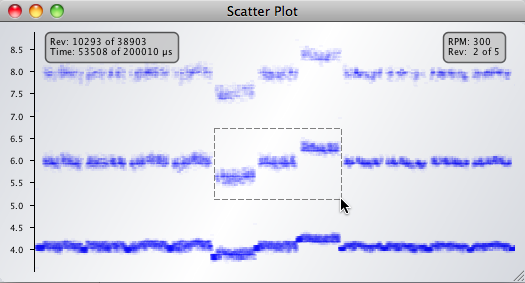 Image profiles are now kept in <user home>/.kryoflux/image-profiles.xml. Existing profiles will automatically be migrated the next time there is a profile change (to force it, open Settings and click on OK)

You can now load any image types that had been added in newer DTC releases. The "Update" button in the image profile settings screen will add anything not currently in your list. If you have made changes to existing profiles, or added your own, they will not be affected. 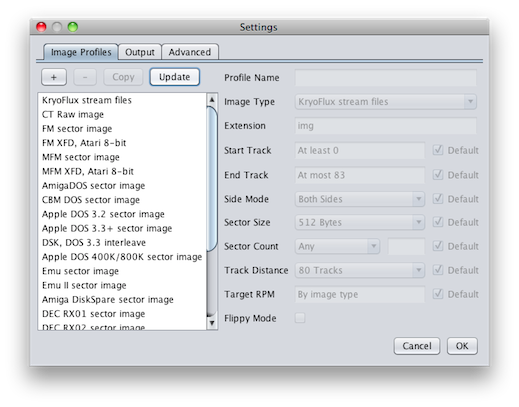 You can now override the maximum track setting detected by the calibration for your drive. However, please note that you do this at your own risk - we take no responsibility for damaged drives by using this feature. 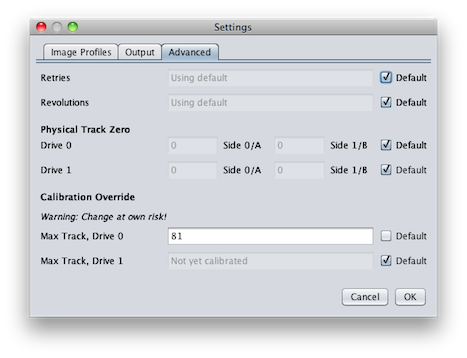 The image profiles are now kept in a more accessible place in <user home>/.kryoflux/image-profiles.xml rather than in an operating system-specific place in the previous version (e.g. the registry on Windows).

Various bugs fixed. If you didn't hear those great X-Copy sounds before, which seemed not to play on some systems, they should now work.

This version will be released soon.
Top

Looks great, although I fear that the bubble display on top of the graphic will be getting in the way a lot.
Would a static information bar at the bottom of the display be out of the question?
Top

Certainly not out of the question, we want to be receptive to user feedback. It's like that simply because it is the same component in that display as the "embedded" one, and was the simplest to implement that way.

You can press the 'i' key to get rid of it, and we could also have it hidden by default. Alternatively we could show it only when it changes, and fade it out after a few seconds (that is how it used to be).

This version is nearly ready for release, so maybe have a play around with it, and tell us what you think. If you don't like it, we'll change it in the next version.
Top

Very nice GUI. Up until now I had only used line command for DTC but this program seems to provide some useful information.
Apart from this thread is there any documentation about usage of the program.
Although very intuitive some features cannot be guessed F1-F5, r, shift-r etc.
Any other hidden goodies?
Top

Good, I'm glad you find it useful. Yeah, we need a shortcut screen! Actually, that is in the development version, we should finish that off.

There may be a couple of other minor things, but this and the release thread has nearly everything I think.

[Edit, ah you are after general usage docs? We did have some stuff like that at some point. I'm not sure where they went to. I'll have a look.]
Top