I've been working quite some while on my STREAM -> D64/G64 converter and decided to try visualizing how the data is laid on the disk.

Layout of a Giana Sisters floppy (large'ish picture) that was erraneously dumped with hall effect sensor replacing the index sensor.

Just for showoff for now.

Well my G64 code is pretty manual so far, depending what kind of format it's being fed with. Some formats like bad sector protection and Vorpal tend to work with minimum work but others like Rapidlok are still pretty much a no-go.

PS. The previous Gianan Sisters image has been updated.

And some more work on the visualizing code tested with Giana Sisters and F-16 Combat Pilot showing some "data".
Top

Looks awesome! Will you provide that tool when it's ready? I can't wait to try it on my stream dumps

That so cool looking!
Top

This is awesome!!! I so want to have a solid stream->G64 converter... I just don't have the time/skill to accomplish it.

What's the mostly red track in the high tracks of the F16 disk? Duplicator info, or...?

The red track (40) was just GCR decoding error caused by incorrect speedzone setting for that track.

One of the many things I yet have to do is the detection of the speed used. And because the tool only decodes CBM DOS sectors it still leaves a lot out.

The G64 conversion so far works in only two ways, it either aligns the tracks from the index information from the stream files or by decoding the tracks to find out where sector 0 of each track starts from. D64 decoding I had been working for a long time already before even getting Kryoflux (I used USB logic analyzer to stream from a 1541) and I started with the G64 conversion after doing Kryoflux dumps of about 100 original games so I could test how far I could get with the protections as is by using the emulator format.
Top

Yes, G64 comes out a little different in every emulator.... That's why we're also pushing out IPF with C64 support...

Nevertheless supporting both is not a bad option.
Team KryoFlux
http://www.kryoflux.com
Top

I would be interested to provide similar type of visualization for Atari users.
Did you use a specific graphic package in your code?
Do you intend to publish the source code?
Top

I'm simply plotting the results as a bitmap file by code. No fancy graphics packages or anything.

And here (the image on the right) I added another visualization to show (in)valid GCR. Everything is presented as how the CBM DOS would see it. Parts of the track that the drive would interpret as a sync are not drawn, and thus makes it easy to see the individual sectors.

The game is Au Revoir Monty, the french version of Auf Wiedersehen Monty, tho all the text in it are still english. The loader is pretty fast but wastes a lot of diskspace. Interestingly they used MFM on this. 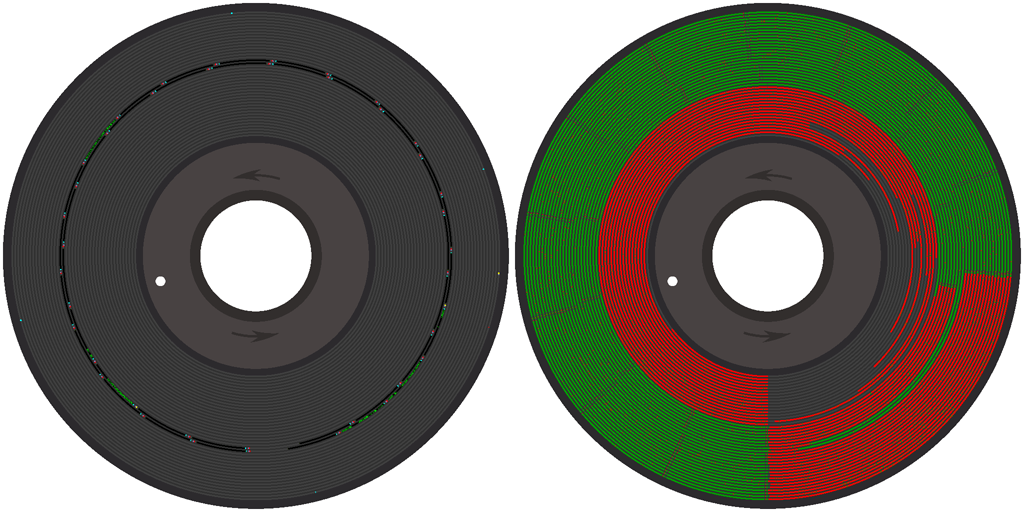