No, Escom machines did not deliver ready signal; thus track loaders that relied on it did not work.

As for the drives... I think it's a drive issue. The correct term is "no flux" as the technique generates no flux signals in the drive (it actually suppresses them). This depends on the analogue part of the drive (AGC etc.), and we assume that things (parts...) changed when HD drives became more common. I think the drive in question accepted higher frequencies due to HD being at least electronically implemented on the PCB. Filtering was different, so the "no flux" trick does not work on these drives. It was a perfect protection apart from this, impossible to duplicate without additional hardware. Even the hardware I know of could not dupe it.
Team KryoFlux
http://www.kryoflux.com
Top

...and no, it's not possible to copy it in any way on an Amiga or on any other home-grade machine.
However most games using NFA alter the gameplay based on the result of the protection check, so unless you actually play the game, you think that the copy works

As an example, (as far as I can remember still...) in Theme Park Mystery it's not possible to board the train or it does not come, or does not arrive - something along those lines, but basically after solving the first few tasks of the game it becomes unplayable.
Top

Hum now I am confuse. I thought the problem was with old drive? but now MrVince talk about HD drive? They were not used on Atari untli very late production?
I understand it is not possible to duplicate on original platform but duplication with dedicated HW was possible in the 80s (Discovery Cartridge) and does not seems problematic with KF?
To check NFA I rely on my visualization program. If the NFA does not read correctly it is easy to see
Last edited by DrCoolZic on Fri Feb 21, 2014 10:32 am, edited 1 time in total.
Top

Was ZrX's C64 disk visualization tool ever completed/available? I would love to see such a thing, and offer to help in any way I can to develop it further.
-
Pete Rittwage
C64 Preservation Project
http://c64preservation.com
Top

It's still alive. The source is ugly mess which is why I haven't let others see it so far.

Some people do have the exe to play with.
Top

It's way cool, more people should be able to use it!!! *nag*
Team KryoFlux
http://www.kryoflux.com
Top

Apparently there is a hidden intro on side 2 of California Games. 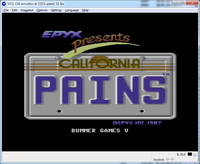 Lol, how do you get to see that?

I think a few epyx games have texts along the lines of "yet another boring game compilation" etc. Just decode them with DTC.
Top

As a let down, just a moment after finding that I found an interview of some of the creator where he states to find the easter egg, load side 1, but when it starts to seek to load the intro flip the disk.

I copied the directory track from side 1 to see if it would load as I noticed there was similar data to the intro while decoding the Vorpal data.

Other Epyx sports game seem to have easter eggs in them aswell.
Top
Post Reply
39 posts