Have an idea how to make KryoFlux even better? Let us know...
Post Reply
25 posts

Oh, I thought you were saying there was a plastic piece connected to an actuator that moved to cover the sensor when the KryoFlux triggered below zero access. You are talking the small extension added to the "front" of the track zero marker arm on the head assembly. I would have to take the drive apart to see that, and I don't have the ability to do that safely. It's done this since I bought the drive (pre-modified,) so maybe that bit of the mod was accidentally skipped?
Top

It should be visible from the underside aswell extending half a cm or so towards the spindle. In atleast on modded drive I've seen black plastic tape used which is quite transparent to infrared light and failed randomly.
Top

Well, I have most of the write issues fixed. Don't know how. I removed a metal shield to try and see if I could get a look at the T0 sensor (can't,) and skipped putting it back on while doing a write. Mainly to see if I could spot the T0 sensor then (nope.) Only, the write was going through just fine (verify stating OK - yes a G64 with mastering data.) Did a write of the RAW stream files after that, and they wrote just fine as well (mostly, 1 error cropped up, but a second write to that section with erase turned off fixed that.) Next, I created a G64 without mastering (same disk image,) and wrote it. Verify was disabled, but it wrote just fine (did a dump with no errors.) Tried a G64 with some home written software, and it worked just fine as well. Tried this specific D64 from a 3rd party software purchase, and it's nothing but errors.

Thought at first it was this software, somehow, but couldn't figure out how a D64 without an error map resulted in a disk of nothing but errors. Then I tried creating a blank G64 and writing that and got nothing but errors. Next I created a G64 with 64-Copy instead of Vice, and it worked just fine. Used 64-Copy to convert the D64 to G64, and it wrote just fine as well.

Further experimentation showed that formatting a G64 disk, even when created elsewhere, caused the same problem. But creating a blank disk in 64-Copy then just copying files over until it's full doesn't cause a problem. Doing a disk copy will also result in nothing but errors.

My final test run was to do everything in a different emulator. Ended up with the same results. Doing a format or data level disk copy breaks the G64 for DTC writing, but just copying over files seems to work just fine. So, writing a game's data disk that I've been playing in emulation to continue my game on real HW will probably be hit-or-miss. Would depend on how low a level the game writes to the disk

If it's an unprotected disk, then I could just use D64 and do a conversion when the time comes.

that is all a change of topic, though. So, to get back "on" topic:

Can't visualize the T0 sensor, so I don't know if it has a good extension added on or not

Here's what it looks like on one of my Panasonic drives (minus the extra electronics shown): 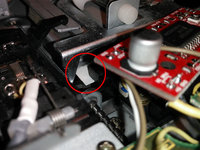 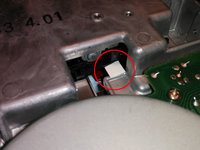 I have a different drive model, but I can't find anything like that on any of the moving parts that are visible. It's possible there's something on the underside that I cannot see, but I would have to take the drive completely apart to get to that area