"could not communicate with kryoflux hardware"

All questions about how to use KryoFlux go here.
Post Reply
20 posts

The Kryoflux hardware should come up as USB device "Atmel Corp. at91sam SAMBA bootloader". DTC changes that after the firmware gets loaded to "www.softpress.org KryoFlux DiskSystem" and the LEDs start flashing.

If you get something different a wrong driver gets loaded!

Is there any kind of atmel development kit (AVR, ATmega, Arduino etc.) installed which is causing the wrong driver to be loaded?

Thanks very much for the reply.

I checked just now - when the kryoflux is plugged into the mac, it is recognized on the USB tree as "communication device ...vendor ID 0x03eb (Amtel corporation)"

I searched for amtel on the mac and didnt find anything, however there is a bluetooth app called "AVRCPagent.app"

Could this be causing an issue in regards to proper driver loading? Is there a way to quality control for all of this?

To be honest I have no further idea at the moment. I think that there is a KEXT (KErnel EXtension) on your machine which gets mistakingly connected to the kryoflux board as soon as you plug it in, and therefor preventing DTC to load the firmware.

Do you have a Windows VM installed on that machine? Than it should be possible to load the firmware while the USB-port is connected to the VM via windows. After releasing the USB-port from the VM it should show up as "Kryoflux" to MacOS and should be recognized correctly (this should not be misunderstood as a workaround but as a test).

BTW: What's the version of DTC and the KryoFlux GUI you use? (Should be shown on the information window if you start the GUI). I think you have to use DTC v.2.62 to get it running with MacOS 10.7, but that will not affect the underlying driver problem I guess...

Thanks very much for the response. I have approximately 20 KEXTs on the machine. I don't have a windows VM.

I guess the question is - should I delete some of the KEXTs / drivers or install a windows VM as discussed above? What would be easier/safer ? (I only use this mac for archiving) And what Window VM?

I have GUI and DTC v2.62 installed

I am having the same problem. To try and narrow things down, I set up a MacBook Air (mid 2011 model) by wiping the disk and then doing a clean install of macOs 10.10.5 (Yosemite). I then ran the KryoFlux.mpkg installer from kryoflux_2.62, which is listed here (https://www.kryoflux.com/?page=download) as being compatible with macOs 10.10. Finally, I installed Java version 8, update 291. To confirm this, here are some screen shots:

I then tried to run the kryoflux-ui.jar and perform the calibration step, but got this result:

As suggested in this thread, I also tried running dtc -c2, but got this result:

Note; during all my testing, only the RED LED illuminated. I did not see any other LEDs flashing.

I also measured the voltages going to the floppy drive from the supplied power supply and confirmed that 12 volts and 5 volts are present. I also swapped in another USB cable and tried both USB ports on the MacBook Air. I also tried pushing the RESET button on the board while the kryoflux-ui.jar was running and then retried the calibration step, but got no result.

Prior to this I also tried using the board with Windows 10 running in emulation on Parallels 16, but was unable to get the driver to install. I don't own a Windows PC and currently have access to one. I also looked into installing Windows 10 on the MacBook Air using bootcamp, but bootcamp is not supported for my mid 2011 MacBook Air.

I'm starting to wonder if there is a problem with the board... Are there ay other tests I can run to verify that the board is functional?

If the board is good, attaching it in e.g. Windows will cause a "bing" and a SAMBA device or similar will show up. The Mac will also show something as a connected device in "About this Mac / System Report / USB".

To search for the issue the GUI is not helpful. It's just a GUI, using the underlying DTC. From the log snippet you've posted, it looks like something else is hogging the device. We've had e.g. DVB-T drivers blocking the device. Are there any unusual kernel extensions installed ("System drive / Library / Extensions)")?
Team KryoFlux
http://www.kryoflux.com
Top

>The Mac will also show something as a connected device in "About this Mac / System Report / USB". 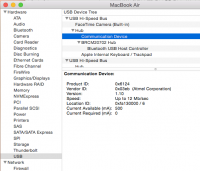 > Are there any unusual kernel extensions installed

No, as mentioned before, I wiped the SSD and did a clean install of macOs El Capitan and then installed Java 8 before running your KryoFlux.mpkg installer. Nothing else was installed.

Hey, guys! Can you throw me some kind of lifeline here? Short of buying a PC, I've tried everything that's been suggested and that I can think of to get the board to respond, including connecting the erase jumper and going through a 10-20 second power up, then power down and remove jumper, then power up again cycle.

Since it does show up in "About this Mac / System Report / USB" I assume it is responding in some fashion and is, therefore, not completely dead. And, having done a clean install of macOs 10.10.5, I think I've ruled out interference from other, 3rd party software claiming the device. Is there a command I can give that might provide a more verbose kind of error report? I do own a USB bus analyzer, so I could resort to that but, lacking any in-depth knowledge of how your device should respond, I'm not sure that would tell me much. However, if someone there can tell me what to expect to see on the bus, I can give that a try.

I'm not that familiar with MacOS but this should help to find which driver is loaded:

most likely some standard OS X Extension is blocking access to the device. Can you go to the Terminal and enter

and provide the output?

and provide the output (long)?

Jump to
Powered by phpBB® Forum Software © phpBB Limited
KryoFlux is a registered trademark ® of KryoFlux GmbH. Used with permission.