What is on that disk?

All general stuff about SPS, like philosophy and mission - discuss it here!
Post Reply
2 posts • Page 1 of 1

What is on that disk?

So lets begin with a C64 floppy protected using the later "Cyan" protection, named such because of it turning the screen cyan when the protection fails.

This animated gif shows 5 rotations from the end of track 31 sector 1 containing the "weak bits" the protection is based on. Top section is the analog signal coming from the R/W head of the floppydrive, and the bottom section shows digital pulses which KryoFlux samples from the drive read-output.

The quiet section on the analog waveform, which is the "weak bits" in this case, is seen by the drive riding at the centerline and by crossing that line it'll cause a pulse at the read-output. There are actually two signals coming from the R/W head which are at opposite phase to each other, one from each side of the coil in the head. A differential signal, like ethernet, USB and SATA nowadays, less error prone on weak signals than just a single signal. When the signals switch phase it's a sign of change in the magnetic polarity on the disk surface.

Atleast two reads are required to make out from the digital read-output what the signal is all about. The more reads, the more obvious it'll become.

Such a weak signal combined with interference, drives amplifier logic, etc. becomes a source of randomization. Protection code usually reads it a couple of times and if the result is changing it'll regard it as an original disk. Typical copy programs would just overwrite the section with a consistent pattern which results as a non-changing data between different reads.

Spikes seen in the analog waveform match those of the "undershoots" of the digital signal. Since the analog signal is very weak it will pick up interference from the digital side of the drive (Tho I'm not actually sure if in this case it happens due to the oscilloscope probes connected around the drive).

FYI: Higher or lower sampling frequency doesn't preserve anything of value from this part of the signal. If it's coming out as random noise, you might consider it as "weak bits" or just blank space on the disk without polarity changes.

Re: What is on that disk?

This is what your (almost) typical C64 floppy contains. How it looks like when it came from the factory, and after you've ruined it with your 1541, etc. 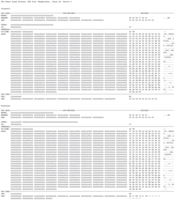