All questions regarding the dumping of media go here.
Post Reply
6 posts • Page 1 of 1

Having used Kryoflux to image disks from a sealed PC game (Serpent Isle), I expected all tracks to show up as "good" (green) in the UI. To my surprise, for three of the seven disks, every single track was displayed as "modified". The remaining four disks were all good as expected.

I've had this before with HD disks, but always attributed it to them not coming from a sealed package. On the other hand, I've never experienced that with DD disks.

So is it possible that for HD disks, the software's standard for determining "extra bytes in header" is stricter than necessary, or is the unavoidable conclusion that the sealed game wasn't "factory-sealed" after all (i.e. reshrinkwrapped)? Or is there something I'm doing wrong with the settings that could trigger this behaviour? The game has no on-disk copy protection, but asks questions from the documentation (map).

I've attached one track's stream from the supposedly all-modified disk 1 in case you want to take a look.

Remember: anything that is below the quality of Trace duplication will eventually show up as modified. It just says what it is: modified, if interpreted by today's standards. Might very well be a good dump and should be compared with a second...
Team KryoFlux
http://www.kryoflux.com
Top

I know the feeling

We can do nothing there except wait for other dumps to compare to really. 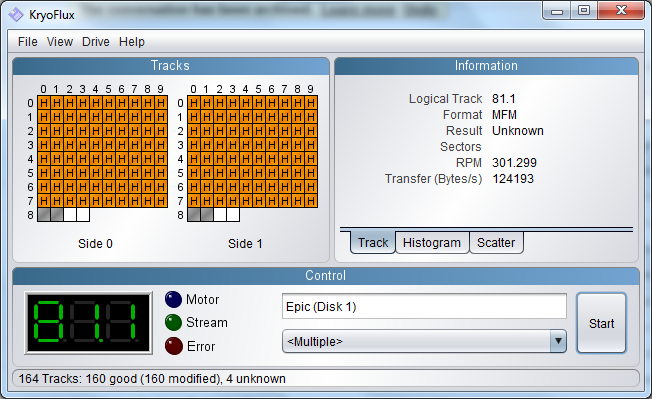 Yes, the check (actually multiple checks in data and time domain) is very strict and very accurate so far, apart from a few edge cases.
We'd rather have a few false positives that need to be checked in more detail than thinking something is unmodified, when in fact it is modified...
Will take a look at that track eventually to see which check(s) don't pass, but chances are there is a good reason

Thank-you all for you replies. Looking forward to IFW's stream analysis.

This leads me to a second question: what is the SPS' "second copy from the same contributor" policy? Meaning if I were to purchase a second copy of the game, and I were to get the same result with that second copy's disks, would that second copy count, or would it be rejected since you have no way of knowing whether I really bought a second copy or just re-read the first one with a different drive? Of course, I could make pictures of both copies lying side-by-side as proof, I suppose.
Top

It is normally accepted (unless there is a good reason not to...), but usually we try and locate a second copy from a different region e.g. Germany, UK, France - as at least one of those would surely use professional duplication as they were large enough markets.
Top
Post Reply
6 posts • Page 1 of 1