All questions regarding the dumping of media go here.
Post Reply
5 posts • Page 1 of 1

A few months ago, I modified a NEC FD1157C for flippy dumping without using the track-zero bypass. I'll post more details about the hardware mod later, but the gist of it is:

This means the drive (logic) doesn't need to step below zero to read tracks 0-7 on side 1 in flippy mode.

To make useful dumps, DTC needs to be told about the drive's physical offset using the -a and -b switches:

These are global options (not per-image), so only need to be specified once. When using flippy mode, the normal offsets required would be -a0 -b-8. Due to my drives physical offset, the offsets become -a8 -b0.

The command I used for dumping original C64 disks is:

You could dump both sides of a flippy CBM DOS disk to D64 with:

Ah, John is back. Tried emailing you about this. Of course needs a drive that can go to +8, but of course an option.

Here are details of how I modified the NEC FD1157C drive.

Firstly, I must thank RJMcInty for the videos of the Panasonic mod (here), without which I doubt I would have attempted this.

The NEC FD1157C may be one of the easier drives to modify because:
- Little filing is required, most of which is filing of plastic, and most can be done away from the drive assembly.
- The head assembly is easily separated from the track stepper (two screws) without destroying drive alignment - a plastic locating key/spike ensures alignment when re-assembling

Before starting, locate at least one known good disk that has track number 0 data (track 1 for CBM DOS) present at track position 0 on side 0. (Beware CBM DOS disks with all tracks offset - I have a couple of these that were formatted and written in my 1541)

Note that all pictures shown here were taken after the modification was completed. 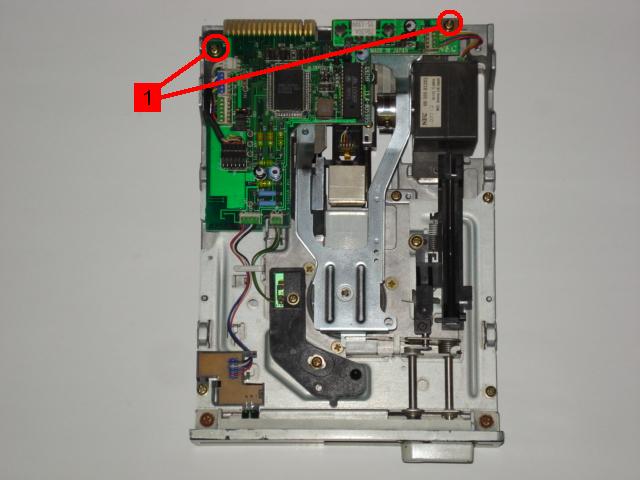 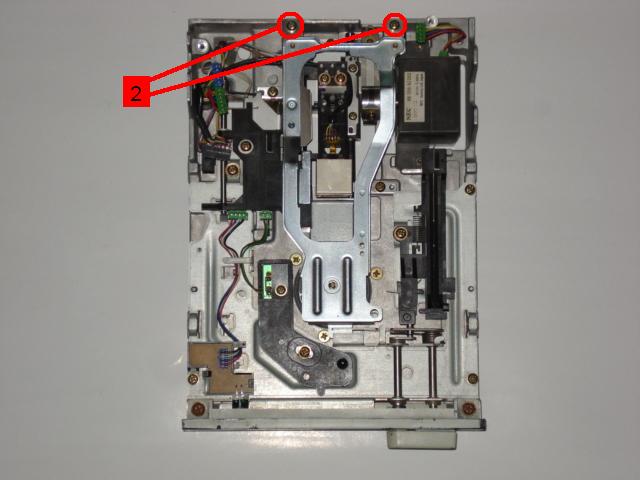 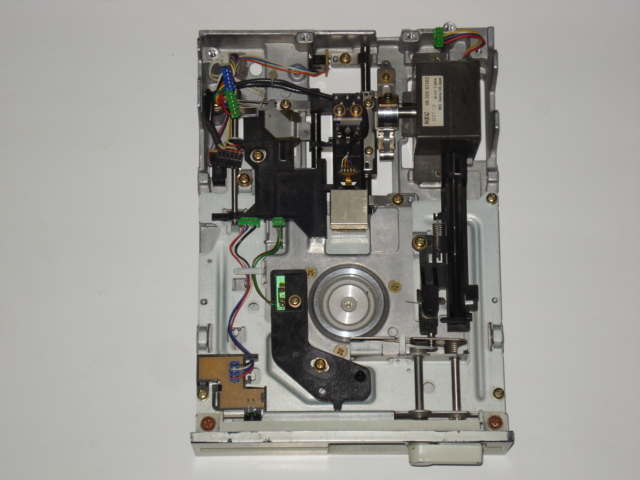 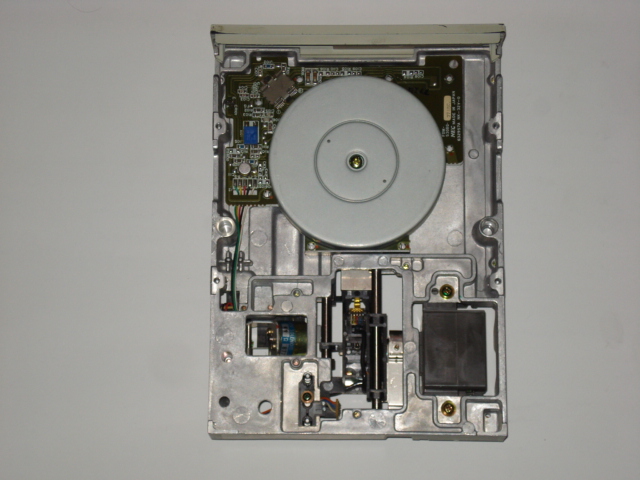 - Remove the roll-pin (3, shown removed) that restricts the rotation of the stepper motor. Do not unscrew anything on the stepper motor to do this. Instead, use narrow nosed pliers to slide the pin out until it hits the motor body, then twist it out completely. This will destroy the roll-pin, but the drive works without it. 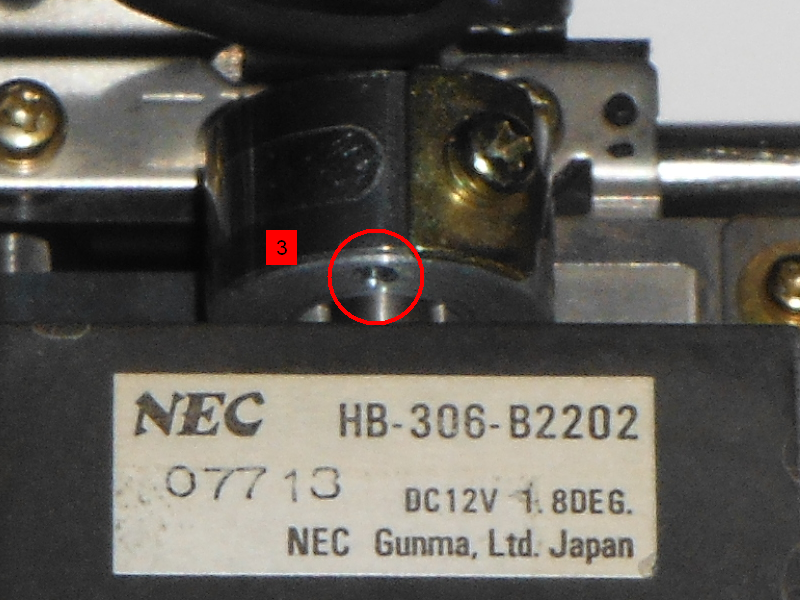 - Remove the head assembly - 2 track linkage screws (4); 4 rail clamp screws (5), one of which is located under part of the head-loading mech retained by screw (6) 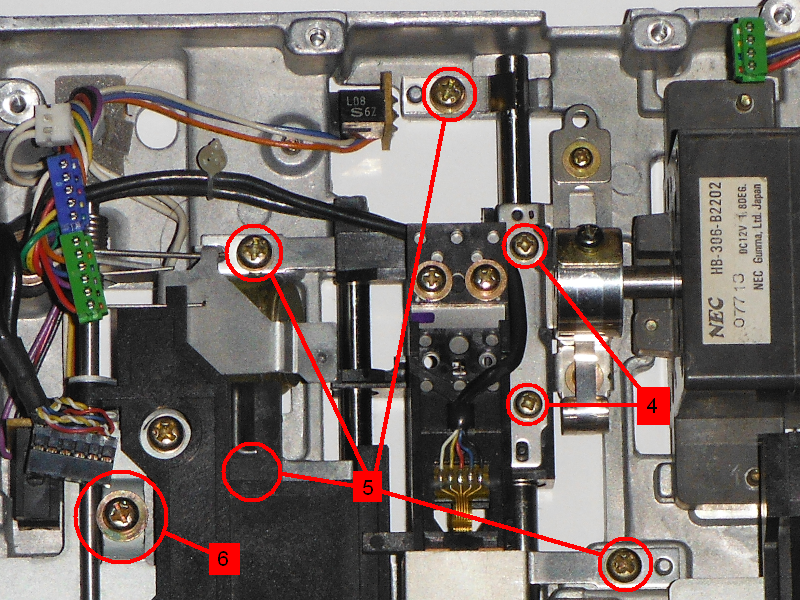 - Push rear bush (7) into head assembly as far as travel (barely 2mm) will allow.
- File down rear of head assembly (8), nearly down to the bush (make sure you don't file the bush - you'll wreck it). Take GREAT care to not file or damage the alignment key/spike on the upper surface.
- On the left side of the head assembly, file down the rear face of the guide (9) that runs on the left track rail. Ensure you file sufficiently far to the right (towards the centre of the head assembly) in order to clear the left-rear rail clamp (9a). 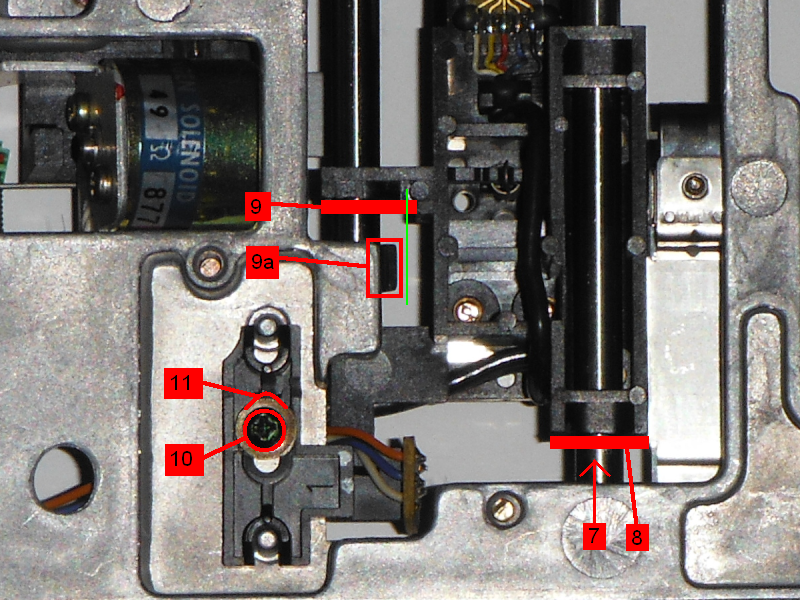 - On the underside of the drive, mark the current position of the track zero sensor, front and rear.
- Remove the screw (10) retaining the track zero sensor.
- Use a small round file to elongate the adjustment slot (11) in the plastic sensor mount so that the sensor may be positioned further towards the rear of the drive assembly. I can't remember if I had to file the rear-most slot, but if you run out of adjustment, check that too.
- Re-fit the sensor in its original position

- Before re-fitting the clamping assembly, cut/file a slot (12) in it where the upper part of the head assembly may now hit it. 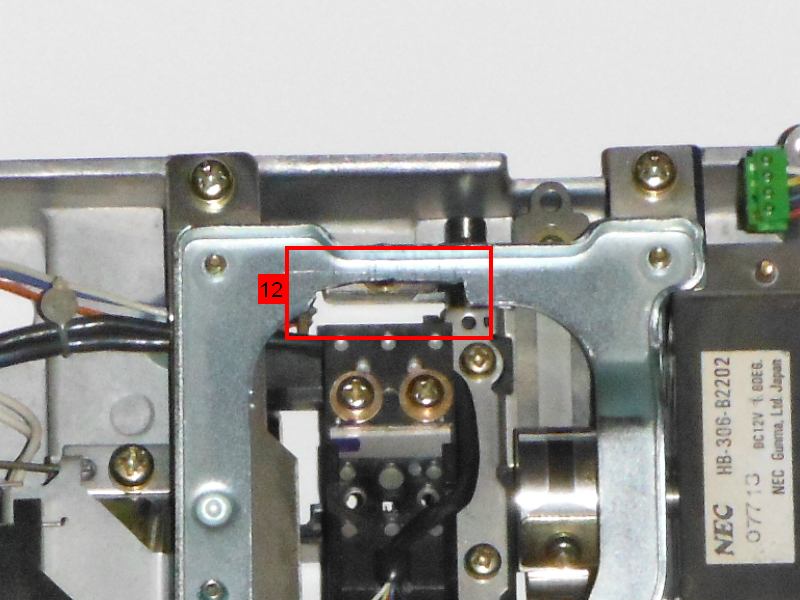 - Using the disk(s) with known good track zero on side 0, adjust the track zero sensor position (moving it towards the rear of the drive) until DTC reads track 0 data at track position +8 - this may take a few attempts, by trial and error.