All questions regarding the dumping of media go here.
Post Reply
17 posts

The other day, a user on the Vintage Computing forum posted some Kryoflux dumps of two boot disks for a Victor 9000. I was trying to help them confirm if these were usable, but these are a very odd format and I don't happen to have a Victor 9000.

These disks use CBM CGR encoding, are not index aligned, and use variable bit rates (sort of like Macintosh low density disks).

The format of the discs is described in this PDF around page 90:
http://bitsavers.informatik.uni-stuttga ... _Jun82.pdf
with more info here:
http://www.discferret.com/wiki/Victor_9000_format

They were unable to simply write the Kryoflux stream files back to the disk. Apparently the Kroyflux has no way to write non-index aligned tracks? (I usually work with IBM PC stuff)

I was at least wondering if anyone here could at least tell if what was read was "good". I have no idea how 5.25" drives react to non-standard bitrates.

Also, is there any way to process the images to align the tracks to the index? One of my tools supposedly can do that with Apple GCR, but it doesn't talk CBM GCR.
Top

That is correct. As of today KryoFlux writes from index to index. We still have no intention to mangle with "holy" dump data so you'd need to write a tool if you want to manipulate the write splice.

This isn't trivial, there's a KF update in development for over a year that mostly deals with this only. Note that the write splice does not necessarily need to be in the gap.
Team KryoFlux
http://www.kryoflux.com
Top

- these were my dumps. That does confirm my understanding of how it works though. The issue at the moment is decoding them and aligning the start/end of the track to somewhere where you're not going to end up with the splice in the middle of the data. Thinking about that, do the reads go index-index, or is there some level of overlap on either end so the track can be "joined up" without creating an artificial splice?
Top

Overlap? This is magnetic recording... not knitting.

Splice from splice or index to index are two techniques to replicate disks. For both you usually have a "grace zone", the gap. For index it sits right before the index is reached again at the end of a revolution.

The technical challenge for replicating raw floppy data is to keep the technical gap (turn off write current right before you reach index again) as small as possible.

There is at least one protection on the C64 that works by overlapping the write, needing verify and retries until the data comes back as expected.

This doesn't work for unknown data and you will likely erase the track start.
Team KryoFlux
http://www.kryoflux.com
Top

- I don't think I explained what was bubbling through my brain properly. I was thinking more about whether there's enough information in the RAW format to "spin the track around" and adjust where the start/end are. Obviously though, now I think about it properly, there are 5 complete samples in a RAW track (using the default settings in the GUI), so there's a complete read through of the track over the index if I want to re-align it. So my question was a bit daft.

There certainly is enough data to re-align it, but it is very Victor 9000 format specific. If a program existed to do that, you would have to specify the Victor 9000 format, and it would have to partially decode each track to do that. The PCE tools appear to have an option to align Apple GCR and recently added an option that indicates it may align MFM (like on Atari disks), but they both need to decode the tracks to find where it should start. The PCE tools don't seem to know anything about CBM CGR.

There might be a more generic flux-level method (might be what Mr Vince it talking about - what is "rgis?") but I would imagine that would be somewhat error-prone.

But back to my original question, can anyone even tell if the dump was successful? Or did the drive read gibberish due to the odd bitrates?
Top

I have software that I wrote that can decode RAW streams into bit-streams for a given RPM, I've just never updated it to deal with GCR or victor sync marks or anything. It's been on my to-do list for rather a long time.

The drive won't have read gibberish, I'm quite confident of that.
Top

Tried it with my own tool and both dumps need some fiddling to get valid data. The DOS dump gave mostly ok results but the CPM dump had lots of errors on the outer tracks for about 1/3 of the disk.

Was just a quick hack for my C64 disktool with forced rpm values for the different speedzones and trial and error with bitclocks so results are so-so.

Disks are very C64-like with 512 byte sectors instead of 256 bytes, sectorheader and data ID bytes are swapped and sectorheader is slightly different.
Top

Hmm - the drive that wrote that CP/M disk was playing up a bit, but it does boot fine on the actual machine. I think my dumping drive is probably due a bit of head cleaning though...

Good work on getting some data out of it! It's quite encouraging!
Top

Condition of the very noisy CP/M disk which needs lots of cleaning on the outer edge (remember that on singlesided it's actually the underside, not the labelside, of the floppy where the bits live): 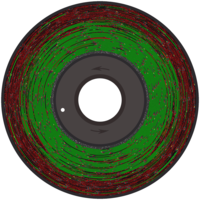 And the DOS disk with some bad sectors on the outer edge (again on the underside): 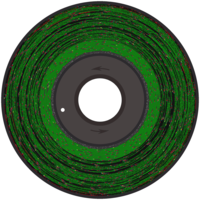 Binary that I managed to pull from the dumps.